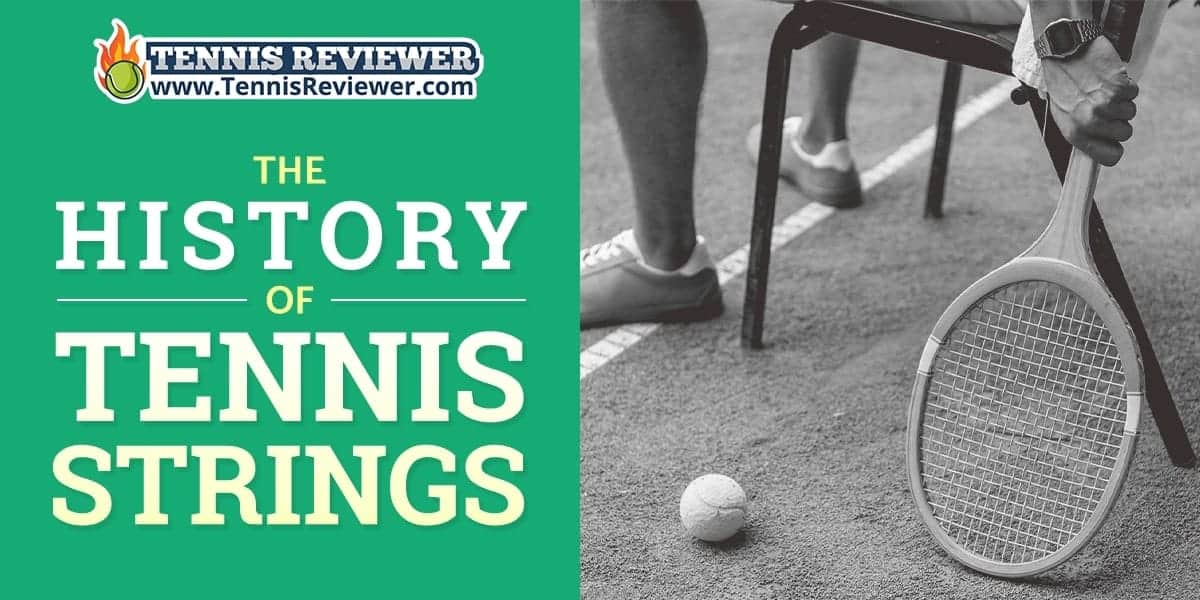 Tennis strings have a fascinating history in the sport of tennis since the material of the string has shifted over the years. The change in material has not only impacted the physics behind how the game is played, but it has also changed how many individuals can afford to play the sport. In order to learn more about the history of tennis strings and their impact on the evolution of the sport, review the information below:

A Brief History of Tennis

Tennis has a very long and fascinating history. The history of tennis originates back to Ancient Greece. However, the closest version to the modern sport known today originates from a French game called “Paume” from the 12th century where players, who were originally monks, would strike the balls with their hands.

Over time, “Paume” evolved into “Jeu de Paume” (game of the palm) where a leather glove was worn to protect the hands. “Jeu de Paume” then changed the glove for a handle that could hit and serve the ball. This handle ended up being close to the tennis racket seen today. “Jeu de Paume” eventually reached the court of Louis X in the 13th century.

The sport continued to reach the royal families and nobility of Europe, which increased its popularity and prestige all over the continent. In the 19th century, tennis became a well-established sport for the elite that began to have official leagues in Europe and the United States ever since tennis has become a sport that is enjoyed all over the world.

Even though handles were used after gloves in “Jeu de Paume,” the first prototype of the modern racket used today was created in Italy in 1583. The first rackets were made of wood and had strings made of gut at this time. The rackets had a slightly different shape than are used today; however, they are the first semblance of a racket being used for tennis. The strings utilized in these rackets were similar to strings that had been used in instruments previously.

What Kinds of Strings Have Tennis Players Used?

There are several different types of materials that have been used for tennis rackets. They are listed below:

Tennis rackets have undergone substantial changes over the years. In the year 1874, Major Walter C. Wingfield registered his patent in London for the rules and equipment of outdoor lawn tennis. That is one of the closest versions of the game that we play today. Rackets at this time were still made of wood and had strings that were made from the outer skin of sheep intestine called serosa.

After World War II, there was a shortage of sheep, which forced manufacturers to look for other materials. In addition, the spread of tennis to humid climates made natural gut even more difficult for players to work with because the material would deteriorate rapidly, which would increase the cost of both tennis rackets and replacement strings. After extensive experimentation, cow gut ended up being selected. Cow gut was far more effective because only three cows were required to make the same amount of material as six sheep.

Today, natural gut strings are still available for more experienced and serious players looking to have a certain quality of tension on their tennis rackets; however, synthetic strings and hybrid strings have also become commonplace in the market.

Natural gut was quite expensive to produce, which caused the cost of purchasing tennis rackets only available to the wealthy. Natural gut was expensive and not durable. Tennis players had to change the natural gut strings on their rackets periodically. The constant need to change strings created additional cost making the sport further inaccessible to the masses. At this time, producers began to look for easier and more cost-effective ways to produce tennis racket strings, and in the 1970’s synthetic strings began to appear on the market.

Synthetic strings began to be explored as a way to cut costs and increase durability. The primary materials utilized to make synthetic strings are polyester, kevlar, zyex, ventran, polyurethane, or nylon. Racket producers attempted creating strings with one of these materials or a combination of them to experiment with a way to improve the athlete’s performance.

Synthetic strings are created by using a single solid strand or hundreds of small filaments. The process required to produce synthetic strings is called extrusion, where the molten polymer is drawn out of a die with tiny holes called a spinnerette. The spinnerette is then stretched to improve its strength. Once the stretching has occurred, the fibers are twisted together in a wrapping process. The wrapping process has two phases. The first phase is to add one solid string, and the second phase is to wrap thinner strings around the first string for durability. Synthetics, when compared to natural gut, do not have the same feel when playing tennis. Nylon has been the most preferred; however, polyester is used to increase the time strings can remain effective on a racket.

After tennis boomed in popularity after the 1980s, racket producers began to experiment with the physics behind the game and which racket string tensions could enhance a player’s performance. Hybrid spring production began to integrate using multiple types of strings on both mains and crosses. Today there are countless different hybrid tennis string combinations and major b, ands continue to experiment with which combination creates the ideal tennis game performance.

What Is Significant About the Change of Material for Tennis Strings?

The change of material utilized for producing tennis strings caused a great impact in how many individuals could afford to play tennis. When tennis racket were first produced, they were very expensive and required routine maintenance. The average working-class citizen was not able to afford the accessories required to play tennis, which kept the sport surrounded by its history of catering to nobility.

Once production increased, and synthetic materials were used for strings, the cost of the tennis racket went down a great deal and attracted new athletes to the sport. In addition, switching the racket from wood to aluminum also greatly shifted the cost of tennis and continued to attract more tennis players.

How Often Do Tennis Racket Strings Need to Be Changed Today?

In order to understand why changing tennis racket strings is necessary, it is important to know how string tension can impact a tennis player’s performance. The kind of strings on a tennis player’s racket can impact how they hit the tennis ball and even the accuracy of where the tennis ball lands on the tennis court during a tennis tournament. The frequency required to change tennis racket strings today is going to depend on several factors including the frequency the player plays tennis, what kind of materials their racket strings are made from, and the shape of their racket head. For recreational tennis players, the general rule of thumb is to count how many days per week they are playing tennis and then change the strings on their racket that many times per year in even increments.

Professional tennis players should also experiment with which tension method, racket, and kind of racket strings have the best possible impact on their tennis game because there are many contributing factors to enhance how the tennis racket responds to the force of the tennis ball on the tennis court. Failure to regularly change tennis racket strings can cause strings to lose tension or even break during tennis matches. Having an understanding of the impact of one’s tennis string choice is vital when attempting to successfully play tennis and enjoy the sport to its full potential.

Tennis is a sport that has a fascinating and established history. The game is great exercise and has countless tournaments around the globe each year. Tennis was originally only accessible to the elite due to the cost of producing rackets and the original expensive country clubs that hosted the sport. After World War II, tennis became more accessible to the rising middle class due to the change in materials on the rackets from natural gut to synthetic materials. Synthetic materials increased the durability of strings on tennis rackets and caused more individuals to be able to play the sport.

Tennis had its mainstream boom in the 1980s and continues to be one of the most popular sports in the world today. As manufacturers continue to experiment with physics to see which kinds of string tensions and materials are required to enhance the player’s game, it will be interesting to see what kinds of innovations tennis strings will experience in the years to come.